We are celebrating the 50th Anniversary of the movie featured within this summers blockbuster film Once Upon A Time In Hollywood, THE WRECKING CREW. This is an exciting campy, spy thriller starring Dean Martin as Matt Helm. Joining us will be Nancy Kwan (Flower Drum Song) and other stars from this classic film… 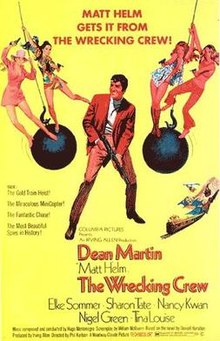 The count has stolen enough gold to cause a financial crisis in the world markets so I.C.E sends in ace spy Matt Helm to stop him. As Matt works alone, the British send in Agent Freya to aid Matt, but it seems that Freya causes more problems than she solves.

A couple’s one-up-man-ship reaches unbelievable heights after a man eats his wife‘s plums.